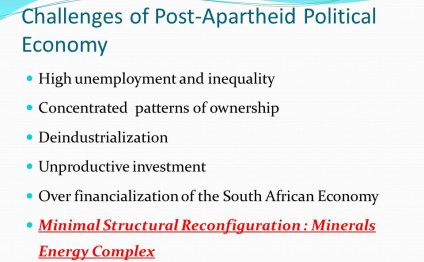 Political and Economic Stability in South Africa:
An Overview

As an emerging economy, South Africa has not remained completely unaffected by the turmoil in other emerging economies world-wide, especially in Asia, and lately also in Russia. This negatively affected investor confidence in these countries.

The fact, however, that we were able to weather this storm so successfully, including an assault on our currency, reflects positively on the inherent strength of our economy; on the soundness of our economic and fiscal policies; and above all, on the political stability in South Africa.

South Africa's peaceful and stable transition to democracy, universally recognised as one of the major achievements of the 20th Century, is not a coincidence or a mere short-term success: the realities in South Africa, which made this miraculous transition possible, are still in place and guarantee future stability. Political stability is the key to investor confidence, especially in today's world. It is, therefore, essential to take a closer look at those factors, external and internal, which are guaranteeing continued political stability in South Africa.

a) Large and longstanding investments by leading European companies and increasingly also from the USA, guarantee the continued interest and involvement in developments in South Africa by the international community.

Noteworthy is the fact that major concerns, who have been involved heavily and over a long period, and who are therefore well-acquainted with the realities in South Africa, are in the forefront as far as new investments in South Africa are concerned (the German company BMW is a prime example).

Coupled with this are the large and well-established foreign communities in South Africa, especially from Europe (such as Greece, Portugal, the UK and Germany), which represent a further guarantee for continued international interest and involvement in South Africa.

Political and economic relations between South Africa and ...