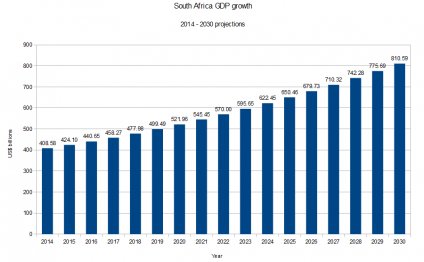 South Africa’s GDP growth in the fourth quarter of 2015 was higher than expected – but not by much.

Gross Domestic Product for the 4th quarter of 2015 came in at 0.6% year-on-year, above expectations of 0.5%, according to Stats SA.

This was boosted by an increase in economic activity in the wholesale, retail and motor trade; catering and accommodation industry and finance, real estate and business services during the quarter..

South Africa is expected to face a tough economic year, with growth for 2016 expected to be under 1%. The IMF and the World Bank expect growth at 0.7% and 0.6%, respectively, while the SA government anticipated growth at 0.9% – down significantly from previous projections of 1.7%.

A negative contribution was recorded by the agriculture, forestry and fishing industry (-0.2 of a percentage point).

These were the growth markets in the South African economy in 2015:

Structure of the economy

The largest industries, as measured by their nominal value added in 2015, were as follows: