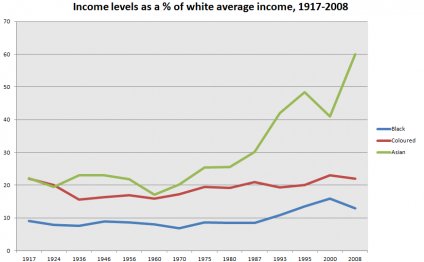 President Jacob Zuma said the census showed the black majority is still at the "bottom of the rung", 18 years after white minority rule ended.

The statistics showed that while the income of black households had increased by nearly 170% in the last decade, they still earned the least.

The population now stands at nearly 52 million, 79% of whom are black people.

It has risen by seven million since 2001.

The 2011 census statistics showed that children below the age of five number nearly 11 million, making them the largest age group.

Much remains to be done to further improve the livelihoods of our people especially in terms of significant disparities that still exist between the rich and poorJacob Zuma, South Africa's president

"It could be that HIV [infection] rates have levelled out and fertility has begun to recover, " said Statistics South Africa's demographic analysis executive director, Diego Iturralde.

Other key findings include:

"These figures tell us that at the bottom of the rung is the black majority who continue to be confronted by deep poverty, unemployment and inequality, despite the progress that we have made since 1994, " he said.

"Much remains to be done to further improve the livelihoods of our people especially in terms of significant disparities that still exist between the rich and poor."

Mr Zuma pledged that by 2030 the African National Congress (ANC) government would make sure that each community had a clinic, school, library and police station.

Top 10 Richest Countries in Africa - List Based on Per ...