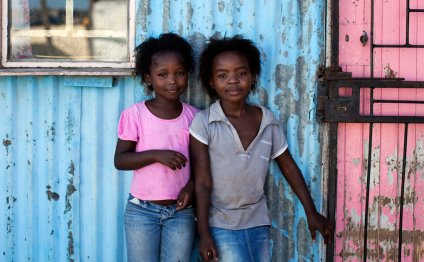 Members of the National Union of Metal Workers of South Africa stand in line for free T-shirts before the start of a protest.

JOHANNESBURG – There is little joy to be found in Sandton, the business and financial heart of South Africa. Although Sandton, a suburb abutting Johannesburg, may be the richest community in all of Africa, and perhaps one of the wealthiest in the world, the business leaders that meet daily here are worried about the nation's future. Although the streets of Sandton are not paved with gold, they could have been, as some of the world's most productive gold and platinum mines are within easy driving distance of Mandela Square and the Johannesburg Stock Exchange, both in the center of Sandton. The luxury auto dealers such as Mercedes, Audi, BMW, Rolls and Jaguar can all be found in Sandton, as can many of the country's top luxury hotels including the Libyan-owned Michaelangelo Hotel, towering over Mandela Square, and the Sandton Sun Hotel with South Africa's busiest shopping mall.

To many, this all seems like a mirage in the face of the many challenges now facing South Africa.

The value of the rand, South Africa's currency, has dropped by nearly 70 percent against the dollar. For years the rand, a model for financial stability, hovered around 6 to 7 rands per dollar. Now it is more than 10 rands to the dollar. It would be a good time for a foreigner to buy a home in South Africa, were it not for the the growing problems permeating nearly every city and town in the country. The fluctuating rand is the least of these problems.

At the time of independence in 1994, South Africa was riven not only by race, but also by income. The white community controlled the economy and was left to manage that economy as a means to a peaceful transition. The African National Congress took political control, but largely left the running of the economy unchanged. There was an expectation that over time, wealth would spread down to those who had been deprived of equality, mainly the black and Asian populations that make up about 90 percent of the South African population.

[GALLERY: Cartoons on the Economy]

There was an optimism, a sense of inevitability of better days ahead for all. This sense of a South African "manifest destiny" hit its zenith with the celebration of soccer's World Cup in 2010. A new subway system was built connecting parts of the Johannesburg and Pretoria, and roads were generally improved. It was not to last. There was an expectation that the World Cup would mark a new era in economics for South Africa. Four years later, it has not happened, and the omens for the future are not good in Africa's most developed economy.