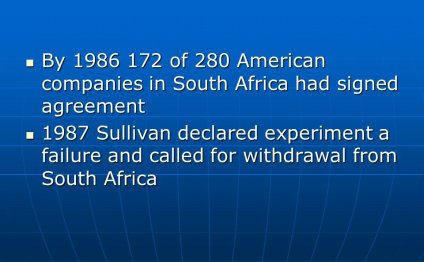 Global companies with a presence in South Africa all cite numerous advantages for setting up shop in the country, from low labour costs to excellent infrastructure and a base to export products internationally. Jim Myers, president of the American Chamber of Commerce in South Africa, says that nearly 50% of the chamber's members are Fortune 500 companies, and that over 90% operate beyond South Africa's borders into southern Africa, sub-Saharan Africa and across the continent. "The sophisticated business environment of South Africa provides a powerful strategic export and manufacturing platform for achieving global competitive advantage, cost reductions and new market access, " says Myers.

In 1995, Acer Africa acquired ownership of a locally based company they had been working with to distribute peripherals and printers since 1980. A leading international PC manufacturer and vendor, Acer recognised the wealth of opportunities in South Africa as local IT companies rapidly came abreast of world standards following the country's first democratic elections in 1994. For Acer, South Africa's modern banking and telephone systems and exceptional water and power rates made the country a sound business location. Acer Africa was established as a base to export to the Southern African Development Community (SADC), Angola and the islands along the Indian Ocean. "South Africa is the only port of entry to Africa, the only place that one would be able to succeed " - Peter Ibbotson (Acer Africa)

"Alcatel has built its worldwide reputation on its production. Investing with local partners [electronics group Altech and black empowerment company Rethabile] in South Africa has meant that we have demanded a high standard of technology and capability, and believe that in many respects South Africa compares very favourably with the most advanced countries in the world." - Bernard Vaslin, executive vice president, Alcatel

Agrid South Africa, an offspring of Agrid International, was formed in July 1999. They are the manufacturers of diesel/petrol engines and agricultural implements for small farmers, a sizeable change from their history of manufacturing for massive farming. Agrid South Africa has focused on exporting their products to Europe and other African countries, more specifically Kenya, Nigeria, Angola and Uganda. However, they recently found a gap in the local market for their products. Agrid chose South Africa for its established and proven manufacturing base, skilled labour at reasonable rates, and readily available management. Other attractions were the expansion of the local motor industry, excellent telecommunications, and the accessibility of sub-Saharan Africa, South America and Australia. "I see South Africa as a low-cost manufacturing base for exporting products to the world." - Ralph Weeks (Agrid South Africa)

Almost 20 years after disinvesting from South africa, Barclays returned in 2005, buying a majority stake in Absa, one of South Africa's "big four" banks. At a cost of nearly R30-billion (2.6-billion), this represented the biggest single foreign direct investment in South Africa and a historic deal "not just for South Africa and its citizens but also for Barclays, " said Barclays Plc director David Roberts. "Absa is a valuable addition to the Barclays Group, bringing significant scale and expertise in the South African market." "It's a huge vote of confidence, " said Dominic Bruynseels, CEO of Barclays Africa and Middle East. "We think South Africa is a positive and growing economy, and we want to be a part of that."

In 1994, BMW opened its Land Rover assembly plant in Rosslyn outside Pretoria, and in 1995 focused on providing one model platform under the BMW badge, namely the four-door 3-series range. "This strategic decision allowed BMW to produce the 3-series in volumes and to the quality standards required to be competitive in the global export market, " said BMW South Africa MD Peter Foster. "The company has recognised quality systems in place to be able to develop new manufacturing technologies, components and systems for motor vehicles in South Africa." The company recently decided to invest a further R2-billion in the South African facility in preparation for the production of future models. It is anticipated that the upgraded plant will be capable of producing up to 60 000 units per annum. This will, in turn, result in a substantial increase in BMW's export capacity, to R50-billion worth of BMW exports from South Africa over the lifecycle of future models. The Rosslyn plant recently began production of the fifth generation of the 3-Series - the first time in the history of the plant that production of a new model had started simultaneously with production in BMW's German plants.

Access to the local and southern African market was a key factors in Britannia Biscuits' choice of South Africa as an investment destination. Research found that there was more than enough potential in the region for Britannia Biscuits to set up a manufacturing base for its key products, which include biscuits, snacks and confectionery. The company has found that real production costs in South Africa are lower than in South East Asia, where it also has operations. "You do not get any better in Africa than South Africa. This is the Jewel of Africa ... In South Africa you have first world infrastructure and third world costs." - Britannia Biscuits MD Sam Ahmed

Cisco Systems established business in South Africa in 1989, becoming the exclusive partner to Dimension Data. South Africa's transport and telecommunications infrastructure make it the gateway to the continent, and Cisco Systems' local branch has since become its Africa headquarters. South Africa offered Cisco Systems an educated, affluent and well-trained labour force with a work ethic comparable to that of Europe and America and no apparent language barriers, creating a knowledgeable and business-friendly environment. The company has committed itself to helping develop South Africa through networking academies in association with local universities and technikons.

EDS South Africa was formed through the merger of three local IT companies in 1995, and by September 1999 was a wholly owned subsidiary of EDS Corp. The company's entry into the South African market was based on a balance of commercial gain and socio-economic and political stability. It was also motivated by a positive impression of South Africa's commercial opportunities and the efforts of the government to create a stable business environment. EDS recognised South Africa's economic growth potential, and believed it could help the country increase its competitiveness in the international market by deploying the latest business tools in the local IT market. EDS South Africa is a founding partner of Savant, a government-led initiative to market South Africa's IT, telecoms and electronic sectors globally.

#OffTheRecord: JP in South Africa, American Bias, and the ...