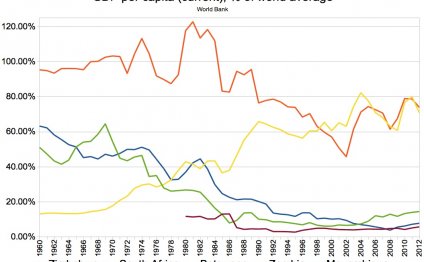 OVER the last few decades, Africa’s failure to achieve rapid growth has puzzled economists. GDP statistics clearly show that African economies have failed to converge with Europe's since the Second World War. While GDP per capita in constant terms almost quintupled in Western Europe between 1950 and 2008, it only doubled in Africa in the same period. Some African countries have not simply failed to catch up with Europe but have fallen behind in absolute terms. GDP per capita in countries like the Central African Republic, Liberia and the Democratic Republic of the Congo have fallen over this same period.

Many scholars still blame the continent’s economic woes on the legacy of western colonialism. But a new paper* by Stephen Broadberry and Leigh Gardner, both at the London School of Economics, seeks to find a new answer to this old question by comparing trends in contemporary Africa to Europe’s development experience over the last 800 years.

Africa’s failure to develop, they argue, should not be seen as the exception, but as the historical norm. Africa’s growth trends since 1950—overall stagnation with periods of growth and decline—appear incredibly similar, both in terms of patterns and level, to those of pre-modern Europe. It took European countries until the 1800s to exceed Africa’s current per capita output. Humanity all over the world, for the vast majority of its history, has experienced periods of growth followed by reversals which have limited increases in per capita income.

Although Africa went through periods of economic growth in the 1950s, 1960s, late-1980s and the 2000s, these growth spurts were off-set by “growth reversals” in the 1970s, early-1980s and the 1990s, when GDP fell. Similar patterns can be seen in pre-modern economic history, when falling per capita GDP figures in the fifteenth and seventeenth centuries wiped out earlier gains.

5 Poorest Countries (by GDP per Capita)