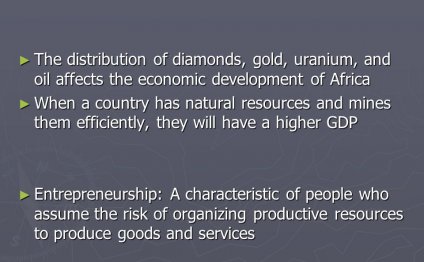 Economic growth in Africa is expected to accelerate to 4.7% this year and 5% in 2015, but the advance is failing to translate into job creation and the broad-based development needed to reduce high poverty and rising inequality rates in many countries, the UN has said.

Although its world economic situation and prospects 2014 report is generally upbeat about the continent, it warns that a global economic slowdown is likely to have a significant negative impact on Africa's performance. And like the World Bank, the UN is worried about the risks associated with a possible bumpy exit from quantitative easing programmes by the US Federal Reserve that have pumped money into the global economy.

"Our forecast is made in the context of many uncertainties and risks coming from possible missteps as well as non-economic factors that could stymie growth, " Shamshad Akhtar, UN assistant secretary for economic development, said.

The main worry is that a tapering or phasing out of quantitative easing could lead to a global surge in long-term interest rates, a fall in stock markets and a sharp decline in capital inflows to emerging economies. "These first-round shocks in international financial markets could transmit quickly to developed and developing economies, " the UN warned.

West Africa should continue to enjoy the strongest growth on the continent, with an anticipated increase from 6.7% in 2013 to 6.9% this year. The region will continue to attract investment in oil and minerals, especially in Burkina Faso, Ghana, Guinea, Liberia, Niger, Nigeria and Sierra Leone.

East Africa is also expected to experience robust growth, increasing from 6% last year to 6.4% in 2014. Growth will benefit from increased consumer spending in Kenya, higher consumption and investment in natural gas in Tanzania, a rise in activity in construction, transport, telecommunications, as well as exploration and construction in the burgeoning oil industry in Uganda.

In the south of the continent, growth is projected to increase from 3.6% to 4.2%, mainly because of declining labour unrest, increased investments and rising mineral outputs in South Africa. Foreign investment is likely to rise owing to huge coal deposits and offshore gas discoveries in Mozambique and increased oil output in Angola. Foreign investors are likely to be attracted to Zambia's copper sector and uranium mining in Namibia.

Economic growth will be weakest in north Africa, a region racked by political instability, particularly in Egypt, Libya and Tunisia. Growth in the region is expected to rise from 2.3% in 2013 to 3.3%; central Africa's growth is predicted to accelerate to 4.8% in 2014 from 2.4%.

"The informal sector is still large and opportunities remain limited for many seeking to enter the labour market, as seen by high youth unemployment rates and wide gender disparities in earnings, " the report adds. "Continual pressure on labour markets from a steady stream of new entrants due to population growth has meant that even solid GDP growth rates have not been sufficient to make measurable impacts."

The UN attributes weak job creation to a heavy dependence on minerals and agriculture, but says growth in other sectors such as telecommunications, financial services, transport and construction in countries such as Ghana, Kenya and Nigeria is helping to improve the situation.

Political unrest continues to pose a significant threat to economic activity in several countries including Central African Republic, the Democratic Republic of the Congo, Somalia and South Sudan. Meanwhile, the reliance on agriculture leaves many countries prone to weather-related shocks.