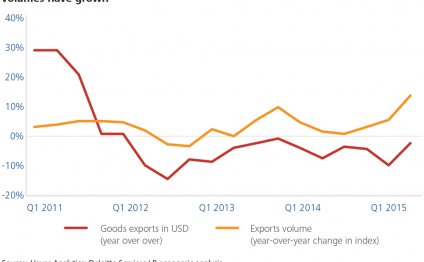 As South Africa struggles in the wake of the racism scandals involving Penny Sparrow and Chris Hart, and ANC protesters sing “Kill the Boer” after four farmers were arrested in Parys for allegedly acting as vigilantes, reports on the state of the South African economy were released. The economic prospects for South Africa are bleak in 2016, and the trend is expected to continue in to 2017.

According to Business Tech, the bleak economic report on South Africa was released by FocusEconomics. The report focused on the economic forecast for Sub-Saharan Africa and projected the slowest economic growth for the region of any region in Africa. Gross Domestic Product (GDP) is expected to be only 1.7 percent in 2016 while it is expected to rise to only 2.1 percent in 2017.

During the opening weekend of the markets at the beginning of 2016, there was massive turbulence in the markets which caused analysts to revise down the projected growth for South Africa in 2016. FocusEconomics further stated that consumer inflation is likely to remain high, averaging 5.9 percent in 2016 and stabilizing at 5.7 percent in 2017. They saw growth expectations as low as.5 percent for the GDP.

“The county’s outlook is dim. The electricity and water supply constraint will hamper growth by both interrupting production and by discouraging investment. Moreover, a moderation in Chinese demand and low commodity prices will weigh on growth.”

As previously reported in Inquisitr, farm murders are a major crime problem in South Africa, and as many as 3, 000 farmers have been murdered since the end of apartheid in 1994. The African National Congress, the ruling party since 1994, has failed to address the issue of farm murders even though the civil rights group Afriforum called for the government and police to make farm murders a priority.

Racism is also a problem with economic policies like Black Economic Empowerment (BEE), which exclude whites from the job market, and has since 2013. Although complaints of racist comments have been leveled against whites, they have been discriminated against in favor of less-qualified candidates through these affirmative action policies.

In another article, Business Tech reported that the biggest problem with South Africa’s economy is President Jacob Zuma, and their recommendation was to fire him. They outlined five things they believed were holding back South Africa’s economy including a bloated civil service, too many state-owned businesses, labor laws that make it difficult to do business in South Africa, and the undermining of property rights.

Chief Economist Dawie Roodt at the Efficient Group said that Zuma is one of the biggest contributing factors to the poor economy in South Africa. Zuma’s nonchalant attitude towards the state of the country, and his sacking of finance minister Nhlanhla Nene and replacing him with ANC back-bencher David van Rooyen hasn’t helped matters.

The Rand Daily Mail reported that the weakened global economy has also impacted South Africa, a factor that South Africa has no control over. The Monetary Policy Committee also said that the bleak financial outlook is further complicated by the producer price of manufactured goods, which contributes to a higher price of goods for consumers. Inflation rates have also risen from an average 4.6 percent in 2015 to an expected average of 6.8 percent in 2016 and 7 percent in 2017. These changes in forecast are influenced by higher food prices and a change in the exchange rate for currency.