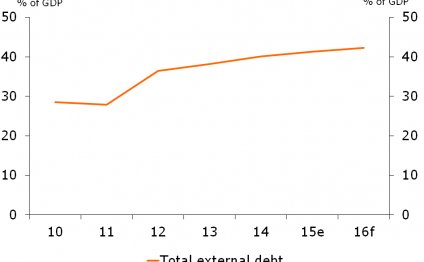 Growth in the South African economy is likely to keep on slowing in 2016. Industrial output will continue to be handicapped by persisting power supply problems and low mining sector prices. Agriculture, which was badly hit by droughts in 2015, could again suffer as a result of El Niño in 2016. Services activity (finance, retail) will remain dynamic.

Household consumption is expected to be held in check by debt, high inflation, as well as the near stagnation in wages and social spending. Private investment is likely to remain low, limited by high interest rates (raised to 6.25% in November 2015), and the lack of vitality in demand (internal and external) and reduced margins, in particular because of more costly inputs due to the depreciation of the rand. The government however should be continuing with its infrastructure projects. Finally, exports are likely to struggle given the weakness in demand, thus limiting their contribution to growth.

Inflation could increase in 2016. Higher electricity prices, the cost of food (as a result of the drought) and other products more heavily taxed (drinks, fuel, tobacco), as well as the ongoing depreciation of the rand are likely to boost inflationary pressures, despite low oil prices. The relative weak level of internal demand, combined with strict monetary policy, could however prevent it going above the ceiling set by the central bank (6%).

The South African government is looking to bring its budget deficit under control and stabilise its debt in order to avoid any further decline in its credit rating, resulting in the loss of its “investment grade” rating. The challenge is not inconsiderable given the feebleness of economic activity which is dragging down tax receipts. The budget announced in February 2016 provides for new tax rises, following that of 2015 (on the revenues). Savings could be made thanks to freeze in public sector wages. However, the infrastructure expenditure commitments would be difficult to revise, given the scale of the country’s needs (electricity production), and the cost of repaying the debt is growing. Support for certain state-owned companies, in financial difficulties (Eskom), could also be a burden on public finances, even though some of the spending is expected to be funded by the sale of State shareholdings (for instance in Vodacom). The debts of these companies will increase the already high level of public debt, although the structure of this (mainly local and long term) helps to mitigate the risk of overindebtedness.

The current account balance could deteriorate in 2016. Higher US interest rates but above all uncertainties concerning the economic and political situation of the country, could, by increasing the rate of capital withdrawals, weigh on the current balance and on the the exchange rate for the rand which already dropped 25% against the dollar in 2015. Exports are likely to be held in check by weak external demand, whether in China (the leading trading partner) or the EU, the lack of competitiveness of its industry and low prices for minerals (over 50% of exports, particularly gold and platinum), despite some recovery. A contraction in imports, due to the lack of vitality in internal demand, could however more than make up for the export situation.

The banking sector, impaired by the concentration of loans to already heavily indebted households, could continue to suffer with the slowing of the economy.

Despite the comfortable victory of the ANC in the May 2014 elections, doubts remain concerning the political and social development of the country. J.Zuma’s authority seems to be more and more challenged, after allegations of misappropriation and the removal of the Finance Minister and hesitation for appointing his successor at the end of 2015. has to compromise with the other at the same time as his authority is being increasing questioned, which Lack of legitimacy, growing internal divisions inside the ANC and between different members of the ruling alliance (COSATU, Communist Party) are reducing the ability of the government to define and implement reforms. The continuing failure to satisfy people’s expectations in terms of overcoming unemployment, poverty and corruption, remains a source of social instability. Strikes and demonstrations, which were mostly focused on the industrial sector (mines, metallurgy, etc.) are spreading (students in October 2015), and are evidence of growing general discontent.

South Africa has modern legal and financial systems and its ranking by certain World Bank indicators in terms of governance (rule of law, voice and accountability) tends to improve. Failings in terms of training, criminality and corruption are however handicapping the business climate.