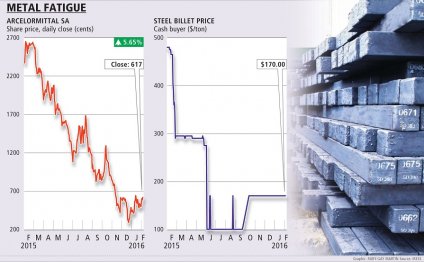 South Africa’s gross domestic product (GDP) has shrunk for the first time since the 2009 recession, decreasing by 0.6% in the first quarter of the year, and causing analysts to scale back their predictions of upcoming interest rate hikes.

The nominal GDP at market price during the first quarter of 2014 decreased by R2-billion from the last quarter to R874-billion. This marked a sharp change in direction from last quarter’s GDP growth of 3.8%.

South Africa’s fall in productivity was largely due to a huge loss of output in the mining and quarrying industry, which decreased by almost 25%.

The sector has been plagued by a mass strike on the platinum belt, which will soon enter its 18th week. More than 70 000 workers affiliated with majority union the Association of Mineworkers and Construction Union (Amcu) have been engaged in an all-or-nothing work stoppage hinged on their demand for a basic minimum wage of R12 500 per month.

According to a website run by major platinum mines Lonmin, Anglo American Platinum and Impala Platinum, the industry has lost R19.84-billion in revenue since the start of the strike.

Nedbank added that “the pace of activity in most of the services industries also slowed to the low single digits. The only rays of light came from construction and agriculture, where output rose by annual rates of 4.9% and 2.5% respectively over the quarter.”

At the same time, the South African Reserve Bank has released a report indicating that the country’s Leading Business Cycle Indicator has continued to decline.

The leading indicator, which predicts trends in the economy, was down by -2.36% in March from the same time last year, following a similar -2.7% decline in February.

“The further year-on-year decline continues to support our view of increased financial pressure on the household sector in the near term, which can have implications for both credit health as well as household-related lending growth, ” said John Loos, household and consumer sector strategist for FNB.

Growth slump
The growth slump could have an impact on the next repo rate decision by the Reserve Bank, say analysts. Last week, the Monetary Policy Committee (MPC) held the benchmark lending rate at 5.5%, but members of the committee were divided on the decision by five members to two.

It is widely expected that there will be another rate hike announced this year, with Reserve Bank governor Gill Marcus already having announced a fifty basis point increase in January.

“We previously forecast a 50 basis point interest rate hike in July, but this hike should now be delayed to the fourth quarter of this year instead, ” said Bishop.

THE extreme and persistent drought has led to national agricultural production declining by more than 42%, an analysis by…