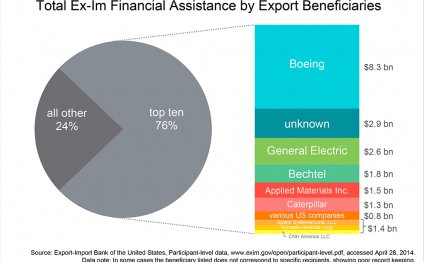 Some members of the U.S. Senate are attempting to resurrect the United States Export-Import (Ex-Im) Bank, whose charter expired on June 30. A few have even gone as far as to threaten a government shutdown over the issue when Congress returns in the fall. Those efforts would be severely misguided and a waste of time and taxpayer money, as the bank has proven to be immune from Congressional reform and has strayed far from its original charter.

The Ex-Im bank provides taxpayer-backed funding to overseas businesses and foreign governments to buy U.S. products. Ex-Im was originally intended to specifically benefit American small businesses that might not otherwise receive private loans in order to assist their exporting ability abroad. A noble cause indeed, and in its infancy, the bank did just that, assisting with U.S. exporting efforts in the 1930 to the Soviet Union and Cuba. In recent decades, however, it has ventured far outside of its stated mission, instead distorting the free market, picking the politically connected corporations it chooses to do business with, and leaving many U.S. businesses at a comparative disadvantage.

The three largest beneficiaries of Ex-Im financing are Boeing, General Electric and Caterpillar, not small businesses by any definition of the word. In fact, those three are multinational conglomerates that can most certainly find private financing elsewhere. That goes directly against the bank’s own charter, which states that the bank should provide export financing only for “export transactions that are unlikely to proceed without Ex-Im support.” In 2012, Boeing alone received 83 percent of all loan guarantees, and in 2013, just five corporations received 93 percent of all Ex-Im loan guarantees.

The bank is unsustainable, and, according to the Congressional Budget Office, is set to cost taxpayers $2 billion over the next ten years. This figure doesn’t even take into account the opportunity cost of diverting these taxpayer dollars, money which could be utilized elsewhere in the economy. Tax dollars should go toward fixing roads and infrastructure, funding troops and national security, not toward funding private transactions for America’s largest Fortune 100 corporations.

Additionally, the bank is unnecessary. Nearly 99 percent of all U.S. exports are financed without the bank’s help. In fact, the bank penalizes those other 99 percent of U.S. exports by distorting the market and putting them in an anti-competitive position, forcing them to compete with companies who do receive federal loan subsidies at more favorable rates.

The bank’s charter has been reauthorized with reforms on several occasions over the past ten years, but the status quo has remained the same, if not gotten worse. Let us not repeat the mistakes of the past – with taxpayer dollars on the line.

Congressional reauthorization in 2012 included conditions that Ex-Im submit a business plan to Congress, respond to a review by the Government Accountability Office on risk management practices, and become more transparent and accountable by categorizing each loan in one of three categories. The bank has failed to comply on all accounts.

Fraud and corruption run rampant. There are more than 30 ongoing cases of fraud involving bank employees, and this year, Ex-Im loan officer Johnny Gutierrez pleaded guilty to accepting bribes on 19 different occasions. A former U.S. Congressman, Rep. William Jefferson (D-La.), was convicted and given a 13-year prison sentence for accepting bribes in 2009 in an Ex-Im related deal, steering federal contracts to favored companies. And Ex-Im has neglected to show transparency in its selection process or business dealings.

Is it time to end the Export-Import Bank?