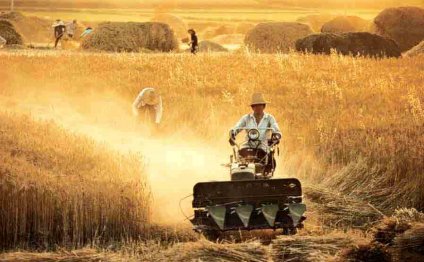 Taking root around 12, 000 years ago, agriculture triggered such a change in society and the way in which people lived that its development has been dubbed the “Neolithic Revolution.” Traditional hunter-gatherer lifestyles, followed by humans since their evolution, were swept aside in favor of permanent settlements and a reliable food supply. Out of agriculture, cities and civilizations grew, and because crops and animals could now be farmed to meet demand, the global population rocketed—from some five million people 10, 000 years ago, to more than seven billion today.

There was no single factor, or combination of factors, that led people to take up farming in different parts of the world. In the Near East, for example, it’s thought that climatic changes at the end of the last ice age brought seasonal conditions that favored annual plants like wild cereals. Elsewhere, such as in East Asia, increased pressure on natural food resources may have forced people to find homegrown solutions. But whatever the reasons for its independent origins, farming sowed the seeds for the modern age.

The wild progenitors of crops including wheat, barley, and peas are traced to the Near East region. Cereals were grown in Syria as long as 9, 000 years ago, while figs were cultivated even earlier; prehistoric seedless fruits discovered in the Jordan Valley suggest fig trees were being planted some 11, 300 years ago. Though the transition from wild harvesting was gradual, the switch from a nomadic to a settled way of life is marked by the appearance of early Neolithic villages with homes equipped with grinding stones for processing grain.

The origins of rice and millet farming date to the same Neolithic period in China. The world’s oldest known rice paddy fields, discovered in eastern China in 2007, reveal evidence of ancient cultivation techniques such as flood and fire control.

In Mexico, squash cultivation began around 10, 000 years ago, but corn (maize) had to wait for natural genetic mutations to be selected for in its wild ancestor, teosinte. While maize-like plants derived from teosinte appear to have been cultivated at least 9, 000 years ago, the first directly dated corn cob dates only to around 5, 500 years ago.

Corn later reached North America, where cultivated sunflowers also started to bloom some 5, 000 years ago. This is also when potato growing in the Andes region of South America began.

Cattle, goats, sheep, and pigs all have their origins as farmed animals in the so-called Fertile Crescent, a region covering eastern Turkey, Iraq, and southwestern Iran. This region kick-started the Neolithic Revolution. Dates for the domestication of these animals range from between 13, 000 to 10, 000 years ago.

Genetic studies show that goats and other livestock accompanied the westward spread of agriculture into Europe, helping to revolutionize Stone Age society. While the extent to which farmers themselves migrated west remains a subject of debate, the dramatic impact of dairy farming on Europeans is clearly stamped in their DNA. Prior to the arrival of domestic cattle in Europe, prehistoric populations weren’t able to stomach raw cow milk. But at some point during the spread of farming into southeastern Europe, a mutation occurred for lactose tolerance that increased in frequency through natural selection thanks to the nourishing benefits of milk. Judging from the prevalence of the milk-drinking gene in Europeans today—as high as 90 percent in populations of northern countries such as Sweden—the vast majority are descended from cow herders.

Agriculture is at the heart of development.

What is the future of sustainable farming? - video

What is the GDP of Africa?

By J.O’S. | JOHANNESBURG ON SATURDAY, April 5th, South Africa was Africa’s largest economy. The IMF put its GDP at $354 billion…