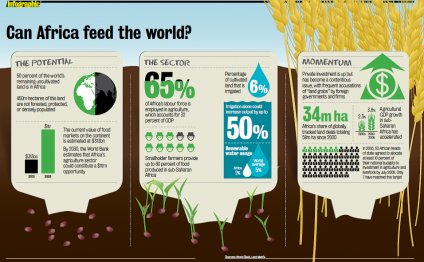 NOT so long ago Jean Pierre Nzabahimana planted his fields on a hillside in western Rwanda by scattering seed held back from the last harvest. The seedlings grew up in clumps: Mr Nzabahimana, a lean, muscular man, uses his hands to convey a vaguely bushy shape. Harvesting them was not too difficult, since they did not produce much.

This year the field nearest to his house has been cultivated with military precision. In February he harvested a good crop of maize (corn, to Americans) from plants that grew in disciplined lines, separated by precise distances which Mr Nzabahimana can recite. He then planted climbing beans in the same field. On this and on four other fields that add up to about half a hectare (one and a quarter acres) Mr Nzabahimana now grows enough to enable him to afford meat twice a month. He owns a cow and has about 180, 000 Rwandan francs ($230) in the bank. Although he remains poor by any measure, he has entered the class of poor dreamers. Perhaps he will build a shop in the village, he says. Hopefully one of his four children will become a driver or a mechanic.

According to the UN Food and Agriculture Organisation, Rwanda’s farmers produced 792, 000 tonnes of grain in 2014—more than three times as much as in 2000. Production of maize, a vital crop in east Africa, jumped sevenfold. Agricultural statistics can be dicey, African ones especially so. But Rwanda’s plunging poverty rate makes these plausible, and so does the view from Gitega. Another farmer, Dative Mukandayisenga, says most of her neighbours are getting much more from their land. Perhaps only one in five persists with the old, scattershot “broadcast” sowing—and most of the holdouts are old people.

Rwanda is exceptional. But in this respect it is not all that exceptional. Cereal production tripled in Ethiopia between 2000 and 2014, although a severe drought associated with the current El Niño made for a poor harvest last year. The value of crops grown in Cameroon, Ghana and Zambia has risen by at least 50% in the past decade; Kenya has done almost as well.

Millions of African farmers like Mr Nzabahimana have become more secure and better-fed as a result of better-managed, better-fertilised crops grown from hybrid seeds. They are demonstrating that small farmers can benefit from improved techniques. Despite some big, much-publicised land sales to foreign investors, almost two-thirds of African farms are less than a hectare in their extent, so this is good news. Progress need not mean turfing millions of smallholders off the land, as some had feared—though by making them richer it may yet give them and their children the means to move, should they wish.

For the time being, though, more than half of the adult workers south of the Sahara are employed in agriculture; in Rwanda, about four-fifths are. With so many farmers and not much heavy industry, boosting agricultural productivity is among the best ways of raising living standards across the continent. And there is a long way to go. Sub-Saharan Africa’s farms remain far less productive than Latin American and Asian ones. The continent as a whole exports less farm produce than Thailand.

The revolution will not be broadcast

Since 1961 the total value of all agricultural production in Africa has risen fourfold. This is almost exactly the improvement seen in India, which sounds encouraging; after all, India had a “green revolution” during that time. But whereas Indian farmers got far higher grain yields per hectare, in Africa much of the new production just came from new land. In the early 1960s sub-Saharan Africa had 1.5m square kilometres given over to arable farming; now it uses 800, 000 square kilometres more.

Another thing African farming had more of was people. Even today, when population growth has slowed in rural Asia and Latin America, in rural Africa it is still 2%. More people meant more workers, which can mean more yield from a farm in absolute terms. But it also meant more mouths to feed. Africa’s population grew more steeply than India’s, and as a result production per person fell in much of the continent during the late 20th century.

The explanations for Africa’s difficulties begin with geology. Much African bedrock is ancient, dating back to before the continent’s time at the heart of a huge land mass known as Gondwanaland. For hundreds of millions of years Africa has seen little of the tectonic activity that provides fresh rock for the wind and rain to grind into fertile soils. There is some naturally fertile land in the south and around the East African Rift, which runs through Rwanda. But much of the interior is barely worth farming (see map).

African Agricultural R&D and Productivity Growth in a ...