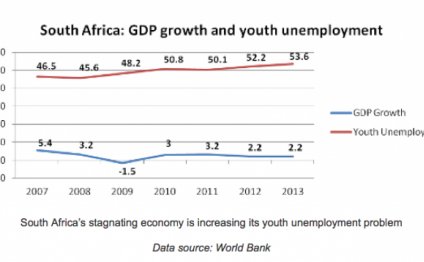 If Moody's is not satisfied that South Africa will be able to strengthen its financial position in the medium term the agency will drop our credit rating to one notch above speculative or "junk" status.

Here's what this means for us:

In simple terms‚ if South Africa were a person with an income‚ debt obligations and a budget to manage repayments of that debt‚ our salary is going down while our costs of debt are rising. What South Africa makes from exports of commodities has been slashed by a weak global economy that just doesn't want to buy our raw materials.

This means the government is not making as much revenue off taxes because economic activity is low‚ and it still has to spend on infrastructure development‚ its public sector wage bill and various other obligations that keep the country ticking over.

Moody's expects economic growth will slow to a paltry 0.5% in 2016‚ which is nowhere near what we need to continue servicing our debt obligations. Our sovereign or national debt mainly takes the form of government bonds‚ which is a form of borrowing where the government promises to pay the lender an interest rate to make the exchange appealing for the investor.

The problem is that‚ with the country's income so dented by the global economy‚ government policy uncertainty in some sectors‚ strained labour relations affecting productivity and its huge wage bill‚ South Africa has to borrow more and more.

This is the edge of the cliff – if South Africa gets downgraded to junk status‚ which would be the next notch down‚ some global investment companies like pension funds and asset managers would be precluded from holding our debt because they have rules about how much risk they can take. Junk status effectively means a country becomes a risk for defaulting on its debt because it might not have enough money to pay back what it has borrowed and the interest it has promised to pay the holders of its debt.

It is a vicious cycle: if we get downgraded‚ investors will begin to avoid investing here‚ the prices of our assets will drop because of the lack of demand for our debt and our shares listed on the JSE‚ the rand will weaken further‚ inflation will shoot up and the average South African will have to endure higher costs for goods and higher interest rates.

This is very similar to what happened to Russia at the beginning of 2015‚ after it too was struggling to make us much money selling oil at depressed prices and was subsequently shifted down to junk status by ratings agencies. Typically‚ according to research by Rand Merchant Bank‚ it takes about 7.5 years for a country to recover from a downgrade to junk status. Those would be hard years of low growth in South Africa's economy.

While finance minister Pravin Gordhan's 2016 budget held promise for the government's plans to rein in spending and increase its ability to pay off its debt while borrowing less over the medium term‚ the problem is the country has been sliding into a difficult financial situation for some years and it will not be a quick fix.

A likely downgrade to junk status is already reflecting in the interest we have to pay to sovereign bond holders‚ and 40% of those bond holders are foreigners who bought in strong currencies. A continuously weakening rand will make it ever more difficult for us to continue repaying that debt at a manageable rate.

What Gordhan and the government need to do is continue to demonstrate a commitment to cutting spending and boosting our debt repayment ability by budgeting smartly. We may not be able to beat the junk downgrade in the near future‚ but we might be able to bounce back quickly with a consistent commitment to reducing the gap between what we earn and what we borrow.

Hopefully a turnaround in the prices of the commodities we produce will contribute‚ but that will require the global economy to work in our favour‚ which doesn't look promising in the short term.

Current Status of the National Library of South Africa ...