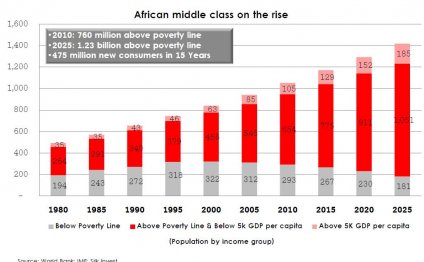 Africa is now the fastest growing continent in the world, the African Development Bank’s states.

The report, just published, says this growth has been driven mainly by improved economic governance on the continent and the private sector.

“Africa’s economic growth could not have happened without major improvement in economic governance.

More than two-thirds of the continent has registered overall improvement in the quality of economic governance in recent years, with increased capacity to deliver economic opportunity and basic services, ” it says.

The report says the costs of starting a business, for instance, have fallen by more than two-thirds over the past seven years, while delays for starting a business have been halved.
It says the private sector has become the main engine of growth as the continent continues to improve its business climate. This growth is increasingly driven by internal demand.
“This progress has brought increased levels of trade and investment, with the annual rate of foreign investment increasing fivefold since 2000. For the future, improvements in such areas as access to finance and quality of infrastructure should help improve Africa’s global competitiveness, ” the report states.

Greater regional economic integration on the continent, it says, will improve the prospects for growth by enabling African producers to build regional value chains, achieve economies of scale, increase intra-African trade and become internationally competitive. Recent years have seen progress in this direction, including the launch of regional organizations to manage regional power pools and water basins.

However, Africa’s inadequate infrastructure remains a major constraint to the continent’s economic growth and development. The report urges greater investment in this area. “African currently invests just four per cent of its collective GDP in infrastructure, compared with China’s 14 per cent, ” it says. “While sustainable infrastructure entails significant up-front investments, it will prove cost-effective in the longer term.”

According to the ADER, growth in the continent’s low-income countries exceeded 4.5 per cent in 2012 and is forecast to remain at above 5.5 in the next few years. Africa’s collective gross domestic product (GDP) reached US $953 while the number of middle income countries on the continent rose to 26, out of a total of 54.

“Strong economic growth has made major inroads into income poverty. The share of the population living below the poverty line has fallen from 51 per cent to 39 per cent. Some 350 million Africans now earn between US $2 and US $20 a day, and the middle class is increasingly becoming an active consumer market, ” the report says.

It, however, cautions that despite this growth, substantial disparities still exist on the African continent. “The challenge will be to address continuing inequality so that all Africans, including those living in isolated rural communities, deprived neighbourhoods, and fragile states are able to benefit from this economic growth. Pursuing an inclusive and sustainable growth agenda is key to reducing these inequalities, ” the report says.

The report adds: “The exploitation of oil and minerals has become a major source of economic growth for a growing number of African countries, but these assets need to be effectively managed and used in an accountable and transparent manner.”