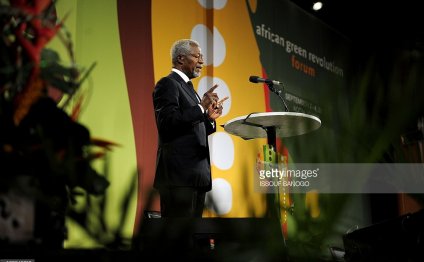 Alliance for a Green Revolution

(AGRA) is an organization dealing with agricultural products in Africa. It is funded by the Bill and Melinda Gates Foundation as well as the Rockefeller Foundation.

Kofi Annan is on its board of directors; various other members are internationally eminent in fields such as agriculture, policy management, planning and coordination, etc.

In an interview with This Is Africa, Jane Karuku, President of AGRA explained their focus: “The first and most important thing is that we have to continue building on the capacity of Africans themselves to do agricultural research. That requires investment in scientists and in research institutions, which receive very little funding by government, so that we can breed more seed varieties that are high yielding and resistant to pests and diseases.”

A "Voices From Africa" conference has suggested that AGRA was planned without African voices, and imposes quick-fix technological solutions on complex and historically deep social issues. Specifically, that it will impose a regime in which farmers lose power over their own seeds and are forced to buy them back from large corporations year after year. This system may also contribute to the marginalization of women. The conference compiled a set of papers containing of different arguments:

Other sources, including the African Centre for Biosafety, ECOTERRA Intl. and The Guardian, have reported that the Gates Foundation, allied with Monsanto and Cargill, plans to aggressively promote strains of genetically modified soy in Mozambique and beyond.

A conference titled "Living With the Gates Foundation" contained some criticism of Gates Foundation sponsorship. One author suggested that Foundation's influence on media and global health was so great it could chill almost all criticism. The above-cited Guardian article, for example, is written by the Director of Agriculture for Impact, a separate Gates-funded endeavor. And the blog series of which the article is a part sports a "Funded by the Bill & Melinda Gates Foundation" graphic in the top right.

The Green Revolution: Waging A War Against Hunger