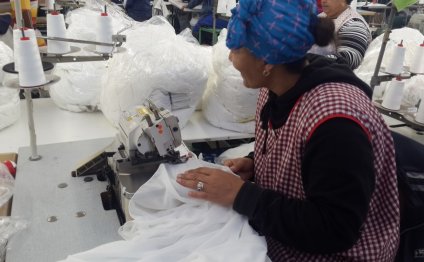 Since 1994, over US$1-billion has been spent on upgrading and modernising South Africa's textile, clothing and footwear industry, making it efficient and ready to compete internationally.

South African market demand increasingly reflects the sophistication of developed markets, and the local textile and clothing industry has grown accordingly to offer the full range of services, from natural and synthetic fibre production to non-wovens, spinning, weaving, tufting, knitting, dyeing and finishing.

Achievements
Although the industry is still relatively small, it boasts some impressive results in world markets:

Most significant, perhaps, is the fact that South Africa has trade agreements with the European Union and the United States whereby the country enjoys a 17.5% duty advantage. In the case of the US, textile exports have increased by 62% since the advent of the Africa Growth and Opportunity Act (Agoa).

South Africa will soon also have preferential access to the Southern African Development Community (SADC) region, thanks to the SADC Free Trade Agreement, which will be in full operation in 2008.

Cotton
South Africa produces in the region of 40 000 tonnes of cotton a year with above world average lint, providing the potential for the local cotton pipeline to become increasingly export-oriented. Cotton fibre and yarn can also be imported from the SADC region to supplement production for Agoa purposes.

Leather
SA has the raw materials needed to produce any type of footwear, from low end to high end. Bovine, ostrich, Nile crocodile, game leather, textile and PVC and PU synthetic raw materials can all be sourced locally without difficulty.

Vegetable fibres
SA is successfully growing and processing natural fibres such as flax and hemp, in response to increasing demand from the automotive and aeronautics industries for environmentally friendly body parts.

The first job losses in the steel industry will come in two waves. The first wave is here, and crisis talks continue between…